According to a study performed by the Birmingham Zoo on birds and window strikes, an estimated one billion birds die each year from collisions with glass doors or windows! 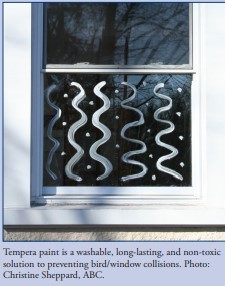 Birds fly into glass and windows because the reflections look to them like  a clear flight path.  Sometimes a collision is hard enough to stun the bird and knock them unconscious.  Depending on the force of the impact, even if a bird is able to fly away after striking a window, he or she may still die a little while later.

What can you do? Here are some options to help prevent  window strikes:

How do I help a bird who has suffered a window strike?

Locate a box with small air holes and line it with clean cloth or paper towels.  As gently as possible, place the bird into the box and place it in a warm, quiet, dimly lit location away from predators.  Do not offer food or water.

If the impact was not too severe and the bird has no obvious injuries, it might be able to fly after about 30-60 minutes.  If not, contact your local wildlife rehabilitator for advisement.  If Happinest is not local to you, you can find your nearrest animal emergency responder through http://www.AnimalHelpNow.org

Photo of window from ABCbirds.org

“Oh no! That’s a Killdeer” said Sherry, as she looked at the picture sent to her phone.  The sender,  a concerned animal lover,  told Sherry she found this baby bird on the ground and assumed it must have fallen from an above nest.  She could see nothing nearby where a nest would have been, so she placed it in a box and was making plans to bring it to Happinest.

Sherry explained, “That’s a killdeer, they nest on the ground. Can you take it back?”  Sherry sent her a picture and said “Here is what the parents look like.” They often will nest near humans, right on the ground, in grass or gravel. They are frequently found in parking lots, on school roofs, road edges and other spots where you find bare gravel.

Killdeer are a precocial species, meaning their chicks are covered with down, eyes open and walking as soon as they hatch.  They follow the parents right away just like chickens and ducks,  needing  parents for warmth & safety.

The finder told Sherry she was now taking the baby back and she had found several pairs of adults. “Yay,” said Sherry.  “They usually foster each other’s chicks. The mother may act injured. They do that to protect their babies.”

Adult Killdeers are well known for a behavior called “the broken wing act.” When they feel threatened or when their offspring are in danger, the parent will try to lure predators – including humans – away from their nest by calling loudly and appearing to be hurt or injured.  They may flail around quite convincingly, limping on one leg and dragging a wing.

“Okay, the baby is going towards one of the adults now. She is doing that hurt thing trying to get me away.  She was within a couple of feet of the baby so I know she saw it.”

“Okay, said Sherry, make sure they reunite. You may need to get further away. Is the baby peeping?”

“Yes, I think it was successful.  Especially since she was acting injured. The mother is sitting on the baby now. That little baby knew right where to go!”

As you can see, in this case, it was a successful reunion for this family of Killdeer.  This situation was a perfect education moment to teach others when it’s right to intervene and when we should trust nature to work it out.

If you ever encounter an orphaned or injured baby bird, here are a couple of things to check before stepping in to help.

To many, the opossum is considered an undesirable rodent.  Here at the nest, we know just how remarkable these creatures really are.  That is why we are dedicated to rescuing and rehabbing these fascinating animals.  With the help of Eugene, our education ambassador, we are hoping to show people why opossums are so beneficial to have around.  Let’s take a look at a few important facts about our furry little friends:

We hope that this has helped alter some of the negative opinions that come along with this “rat-tailed” mammal.  They actually do us a great service.  Still not convinced?  Stop by one of our fundraisers to meet Eugene and give him a chance to show you how delightful an opossum can really be.