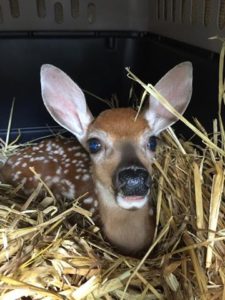 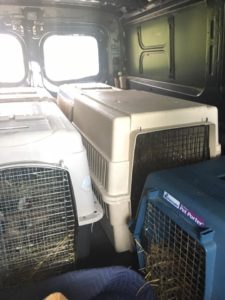 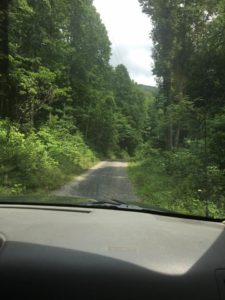 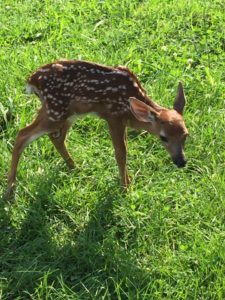 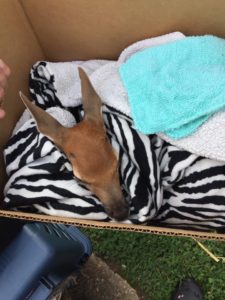 It started out as a normal day for a wildlife rehabilitator – giving medicine, cleaning cages, and feeding baby birds. I was outside by my pool, hosing out some empty cages, when I noticed one of the Brown Thrasher fledglings I had soft released the day before was foraging for the mealworms and blueberries I’d put out on the ground. (In a soft release, you let the bird you’ve raised go but continue to provide food until they choose to be independent.) This particular thrasher came to me in July as an injured nestling, and it made me happy to see her enjoying her second day of freedom.

A short time later Lilly, as I called her, darted by a few feet from me and grabbed what I thought was another blueberry. After a closer look I realized it wasn’t a blueberry at all, but a BIG black spider! I am terrified of spiders. Of course, after seeing it was a spider, the first thing that came to my mind was “Ahh, Lilly saved me from that vile thing!” It took her several minutes to kill and eat it. I was squirming, but I didn’t interrupt her because I wanted it gone! After a few minutes there was no sign of the spider and Lilly flew away.

Fast forward about 30 minutes, to when I started hearing a peculiar barking-like sound. At first I ignored it, but it continued so I went to investigate. That’s when I found Lilly underneath a bush, panting and “barking” with every breath. She was obviously in distress so I ran inside to get the net to catch her. Even though I hand raised her from a baby, she was very wild so this was no easy task.

I chased her all over the yard from tree to tree before finally catching her. At this point she was gasping for air, and I had no idea what was wrong! I put her in a cage, gave her Metacam for pain, and administered herbal Rescue Remedy to calm her down. My mind was racing trying to figure out what was wrong and what to do, but then it came to me … the big black spider was a black widow! I was certain because we have been dealing with an infestation of black widows at our house for years. Had I not witnessed her eating the spider, I wouldn’t have been able to properly diagnose her symptoms.

I was in a total panic, as I had no idea how to treat a bird for a spider bite. I called my vet, all my fellow rehabbers, and I posted for help in the Wildlife Rehabbers Blog Group on Facebook. Lilly was drinking water constantly – I’ve never seen a songbird drink so much and for so long. Most rehabbers suggested that I put activated charcoal in her water to absorb the poison and make her throw up. I was certain she had already vomited the spider, as she was vomiting while I was chasing her around the yard.

I took my fellow rehabbers’ advice and gave her the charcoal. I was a nervous wreck because I didn’t know what to expect; I had never given it to a bird before, and to make matters worse, I had to leave Lilly to go to work at the hair salon! Fortunately, my client was very understanding as I applied her color and then left her to go back home to check on Lilly. As I was driving, Shannon Dawkins with Paws & Claws Mobile Veterinary Services messaged me and told me to try Benadryl. When I arrived home Lilly was still gasping for air and drinking water. Again, I had never had a reason to give a bird Benadryl before, but Shannon and I figured out the dosage.

Here’s a video of Lily in distress…

I ran out the door and as luck would have it, I returned to work just as my client’s color timer went off. I finished her and started my next client, who was also very understanding when I left to check on Lilly again. I drove to the house, praying the whole way because I had no idea what I would find. But to my amazement, she was on the perch and breathing normally! I never thought I would be happy to see a pile of vomit, but there it was, fresh and full of mealworms. The charcoal and Benadryl had worked, and for the first time I felt like she was going to live.

I wanted to make sure I gave her plenty of time to recover after what she had been through, so I kept her for two days. When I re-released her, I thought, ahhh – another day in the life of a rehabber!

The man who rescued this Carolina Wren never intended for this to happen. He had a moth infestation so he called an exterminator, who put down glue traps all around the house. A few days later, he found the wren on the trap in distress.

It was simply attracted to all the bugs and became stuck! Thankfully no bones were broken (which usually happens to birds and mammals on glue traps), but it lost many primary feathers and was even degloved in a few places.

After a lengthy stay in rehab, the new feathers grew back in. The wren was released, along with seven mourning doves, on Halloween Day at the Enterprise South Wetlands. Thanks again to Volkswagen Chattanooga for giving us special access for the release.

Glue traps are extremely cruel and inhumane! No animal deserves to suffer injuries or slow death on these traps. Please don’t allow your exterminator to use glue/sticky traps for insects or pest!!